Do you want a free Survey Software

While collecting data from various types of surveys and questionnaires, marketers often make use of 4 types of data measurement scales, namely: Nominal, Ordinal, Interval, and Ratio Scale.  Among all, the ratio scale adequately serves the purpose as it possesses all the qualities of other measurement scales (Nominal, Ordinal, and Interval scales). 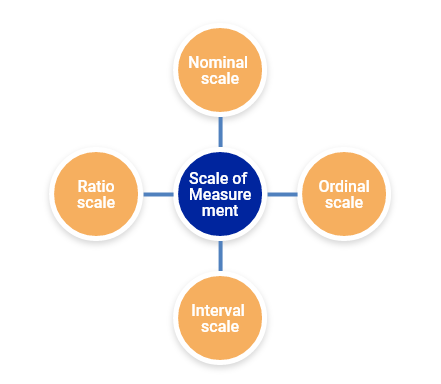 However, the classification among the four is crucial because they determine the characteristics of the variables and the type of statistical analysis you are planning to do as per your business needs.

Therefore, in this article, we’ve discussed the ratio scale about what it is, how it can be used, its characteristics, advantages, and ratio scale examples.

What is a Ratio Scale

Ratio scale is an interval scale with a true zero or origin characteristic. The measurable variables taken by the ratio scale can be counted, ranked, added, or subtracted to make the difference. Also, it has an exact numerical difference, ratios, and specific order between the two variables. Meaning, the data collected via ratio scales can not only be easily categorized but also have equal intervals.

When working with ratio variables, the ratio of two measurements represents a meaningful interpretation. Let’s take “weight”, which is a ratio variable. A weight of 8 grams is twice as heavy as a weight of 4 grams.

“For how many years have you been working with this company?”

“How much time do you spend on Social Media?”

Some other use cases of ratio scale are length, height, duration, money, mass, and revenues. Hence, ratio scales are widely used in marketing research tools to evaluate sales, price, share, revenues, and the number of customers/stakeholders.

The ratio scale is the most informative scale that allows the researchers to apply any statistical technique, such as geometric mean, harmonic mean, and coefficient of variation. Apart from that, one can also measure the central tendency via any of the statistical tools – Mean, Median or Mode.

The ratio scale possesses almost all characteristics to be considered as an ideal scale for research purposes. Despite encompassing all the characteristics of an interval scale, it also has an additional advantage of having a well-defined zero.

Since ratio data is measured on the ratio scale, it, therefore, complies with the distinctive characteristic of this scale i.e true absolute zero point. This makes the data more informative and meaningful – making it easy to define the difference of “how much”. For example, “one man is twice as old as the other” or “6 has twice the value as 3”.

Just because the ratio scale has a true zero origin, it doesn’t have any negative numerical value. For example, the age cannot be -10 years.

Ratio scale units permit unit conversion which is also useful in interpreting symbolic notation used in equations. Units of energy including Joules, gram-calories, kilogram-calories, British thermal units are ratio scale units and hence they can be easily converted to calculate energy flow through a system, for example.

Surveyors/researchers can make use of the few ratio scale survey example to capture ratio data.

1. A ratio scale is used to gather data on age in a Market research survey, uses the scale as follows:

2. A ratio scale is used to figure out how much time people spend on video games.

3. What is your weight in kgs?

4. What is your height in feet and inches?

5. What is the number of minutes you work out each day?

How to Measure Ratio Scale?

Researchers can perform all statistical analyses on ratio data to identify patterns and trends for informed business decisions. For example, the ratio data of marks obtained by 100 students for an exam can be analyzed by both descriptive and inferential statistics.

Descriptive statistics intend to present a big chunk of data with summary charts, graphs, and tables which makes it easier to understand and visualize raw data.

For the results of 100 students, you may want to analyze the overall performance of the students and the distribution or spread of the marks. This can easily be done by descriptive statistics.

Data that comes from descriptive statistics include the mode, median, and mean, along with the range, variance, and standard deviation.

Measures of central tendency: It incorporates the ways of describing the central position of a frequency distribution for sample data, which can be described by using a number of statistics, including the mode, median, and mean.

– The mode is the most frequent value in the data set.

– The median is the middle value for a data set when arranged in order of magnitude (smallest first).

Measures of spread: It includes the ways of summarizing the data by describing how spread out the values are. To describe the data spread, you can use a number of statistics including the range, variance, and standard deviation.

– The range is the simplest measurement that denotes the difference between the values in a data set. To find the range, simply subtract the lowest value from the greatest value of the data set.

– The variance is the measure of variability that indicates the degree of spread in the data set. The more the spread is, the larger will be the variance in relation to the mean. It is calculated by taking the average of squared deviations from the mean and is expressed as meters squared.

While descriptive statistics are used to present the ratio data in a meaningful way, inferential statistics help study the data even further to draw conclusions and hypotheses about the same information. The main areas involved are:

Estimating parameters: This means taking a statistic from your sample data (such as the sample mean) and using it to draw conclusions about the data sample

Hypothesis tests: This test is used to answer research questions. For example, one might be interested in knowing if a newly launched product feature is effective. Or if a specific product helps customers to perform better in businesses.

The main indexes for inferential statistics are:

Difference Between Interval and Ratio Scale

Among all four, interval scale and ratio scale are two of the scales of measurement which describe the attributes in quantitative scales. These two scales are often confusing as ratio data possess all properties of interval data such as – data should have numeric values, the distance between the two points are equal, etc. but zero is arbitrary in internal data whereas, in ratio data, zero is absolute.

Let’s have a look at more differences between these two scales:

1. The variable of the interval scale has a definite order, and the difference between them has meaning but the ratio between them doesn’t have any meaning. For example, increasing the temperature from 15 to 30 degrees Celsius doesn’t mean it’s twice as hot.

On the other hand, both the difference and the ratio between the variables of the ratio scale have meaning. For example, if you increase weight from 10 kgs to 20 kgs, it’s twice as heavy.

2. Another key difference between an internal scale and a ratio scale is that the ratio scale has a true zero, which means if a value is zero, it doesn’t exist. For example, if you measure height as zero then the height doesn’t exist.

3. Statistical parameters such as multiplication and division have no meaning in interval scale variables, whereas ratio data can be multiplied and divided, and this is one of the notable differences between these measurement scales, which can only be added and subtracted.

Leverage the Power of Ratio Scale for Your Next Research

Making use of the right type of measurement scale could certainly help you capture meaningful data and help to make informed business decisions. The ratio scale helps users in collecting intense insights and works best with both inferential and descriptive analysis techniques.

So, are you ready to understand the size of the market, market share, annual sales, revenue, and pricing?

Do you want a free Survey Software

What is Customer Satisfaction Surveys

How to Measure Customer Satisfaction in 5 Easy Steps

Importance of Customer Feedback + Ways to Collect It